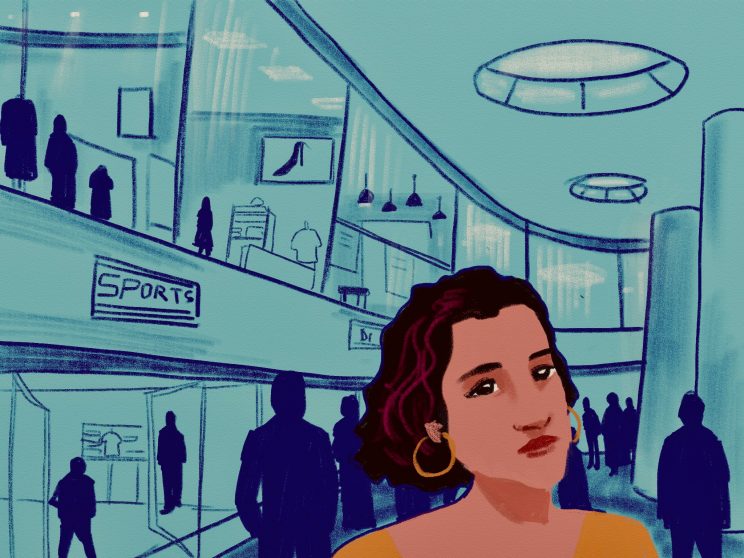 I was in my favourite mall. I like that mall because of a certain level of basic accessibility for disabled people that they maintain, for example, several numbers of restrooms, elevators and escalators for those of us who can't walk around too much or stand for long periods of time. There's also easy readable digital maps on every corner and every zone of the mall is colour coded on every floor for those of us who are neurodivergent and get lost or distracted in a mall easily.

On this day, I was with my partner and we were shopping for household items. We were at a store called Home Centre when I passed two cisgender men, one of whom had a visible orthopedic disability. Since I have an orthopedic disability too, we exchanged a glance and a nod of understanding. At least that's what I thought it was until 10 minutes later. I saw that the two men had followed us around the store. My brain said that maybe it was a coincidence and we just happened to be in the same area, I mean that happens all the time right? No need to worry. 10 more minutes later, I was sitting and resting on a couch at a waiting area for my partner and the store attendant to check on some shopping request, and suddenly the two men appeared and sat across from me. The one with the disability started introducing himself, talking about his disability, commenting about mine and asking intrusive questions to me. Instantly my stomach felt queasy and I remembered something a mentor of mine had taught me about "trusting your gut" when it comes to encounters with men. Within a couple of minutes of them arriving, I got up immediately and excused myself politely. I don't remember clearly but I might have told him my first name, even though later I was sure I did not.

After I found partner, we left that store and it was after about an hour or so when we were headed to a coffee shop that I spotted the same men following us around the huge mall. I felt a surge of frustration, headed towards them and told them off "aapko aur koi kaam nahi hai kya?!" (Do you have no other work?) I didn't wait for an answer and rushed off. I felt panicky and wanted to leave the mall. We encountered the men 2-3 times more where the disabled man would say stuff like "Aapse 5 minute kuch important baat karni hai" (I want to talk to you about something important for just 5 ,minutes) and "please ma'am" and "kuchh inspiration lena hai aapka" (I want to get some inspiration from you) in a very creepy way.

I know that many people would say that it's no big deal, that it's just a conversation, and maybe some would go ahead and just talk to him to be polite. Maybe some courageous women would just tell him directly to shut up and leave us alone. But I have constantly failed at courage when being intimidated at a real life situations no matter how much courage I read about online. But I was just exhausted and kept ignoring his presence.

When I returned home that night, I checked my phone and that disabled man had found me on all my social media accounts and sent me creepy messages. I blocked him and many weeks later, he would message me from other accounts.

This whole situation did not shock me or make me uncomfortable because this is not the first time or even the worst instance where I felt mentally and physically violated by a disabled man. I have reached a point where I actively avoid interacting or looking at cis disabled men because I don't want them to get "the wrong idea" or whatever. I think that cis disabled men often don't understand queerness and they feel that they have some sort of liberty to say/do whatever they want when they encounter disabled women. I don't want to feel that way but we cannot deny that patriarchy and toxic masculinity invades the disability community as well.

Shivangi (@DisabledSpice) is a queer and disability activist. She works as an accessibility consultant, policy advisor, researcher, facilitator and a grafitti artist with a collective called Determined Art Movement (D.A.M.).